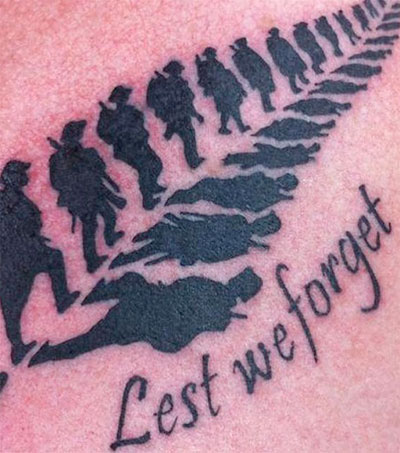 Lower Hutt army veteran Bruce Neal’s Anzac tattoo – a 19cm design of World War I soldiers marching into the distance in a shape of a fern with the words “Lest We Forget” written below – has become an internet hit.

When Petone’s Pieces of Eight Tattoo Studio posted the design on their Facebook page, they could never have anticipated the viral sensation caused by the emotive artwork. The photo of Neal’s tattoo has so far received 130,000 likes, almost 44,000 shares and close to 5000 comments on the tattoo studio’s Facebook page.

Neal, 59, saw the image on a historical information board along the Wellington waterfront where the troops left for Gallipoli.

He is flabbergasted at how his idea for the tattoo has taken off around the globe.

“It must have hit a cord with people around the world – I couldn’t believe it,” he said.

“The tattooist got a call from Russia asking for the stencil.”