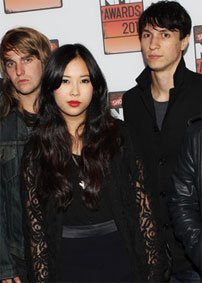 Big Crowds In The Bay

“At the close of 2010, members of Auckland rock combo The Naked and Famous were innocents abroad, wide-eyed New Zealanders who — thanks to sudden international interest in their debut Passive Me, Aggressive You — finally were being invited to tour the world,” Tom Lanham writes for the San Francisco Examiner. “They come back to San Francisco for two sold-out concerts as seasoned vets, underscored by a recent triumphant return to their homeland, where they won five New Zealand Music Awards. “There’s not one day that we ever take for granted,” Laotian-descended vocalist Alisa Xayalith says of their hectic 2011 schedule.