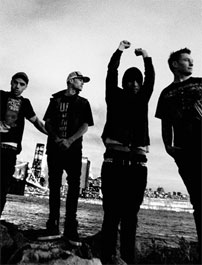 I Am Giant, a four-piece band formerly of Auckland and now based in London, explain their reasons for relocation in an interview with The New Paper ahead of the group’s Singapore gig at Hard Rock Cafe. Drummer Shelton Woolright, 32, said the move was ultimately down to a numbers game. “There are only four million people living in New Zealand, making it really difficult for us to break out as musician,” Woolright said. “We needed to take our unique sound to the world.” The band comprises British frontman Ed Martin and Woolright’s fellow New Zealanders, bassist Paul Matthews and guitarist Aja Timu. I Am Giant’s debut album The Horrifying Truth is scheduled for released in Singapore this month.

TikTok has only been part of our lives for two years, but it’s already had a massive impact on the music business, the BBC reports. South Auckland producer Joshua Nanai, 17,…