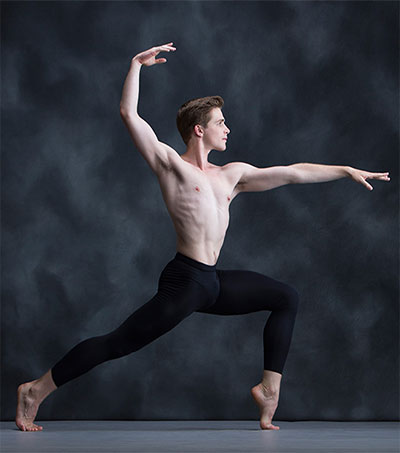 When casting notices first went up for the National Ballet of Canada’s season of Sleeping Beauty, Paraparaumu-born dancer Harrison James, 24, was merely down to understudy Prince Florimund. But circumstances changed, and in the end he got to kiss the princess.

James made his “impressive” role debut this month, partnering illustrious ballerina American Greta Hodgkinson at the company’s opening night performance. It’s a coveted spot because nowadays it’s usually only opening night casts that get reviewed in the mainstream media.

Hodgkinson and James are also scheduled to close the run on the evening of 20 June. With relatively short notice, James has been rehearsing intensively with Hodgkinson under the guidance of principal artistic coach Magdalena Popa.

“Sleeping Beauty is not a brute-strength partnering ballet,” James says. “It’s more about style and finesse. Still, I have to get accustomed to dancing with a new body and Greta has had to be very patient.”

In a review of the premiere, the Toronto Star’s Michael Crabb writes: “[In Act II] Hodgkinson seemed freshly energised by the romantic ardour of the evening’s Prince Florimund, danced by James with an assurance and authority that totally belied the fact this was his role debut.

“From the moment he stepped into the hunting scene, James commanded the stage with a natural aristocracy of demeanour and exciting yet consistently tasteful and elegant dancing. His execution of the long solo Nureyev gives the prince in ‘The Vision Scene’ was exemplary; altogether a memorable debut and clearly one much appreciated by the audience.”

James trained at San Francisco Ballet School in California and the New Zealand School of Dance. He danced with Canada’s Royal Winnipeg Ballet and Béjart Ballet Lausanne before joining The National Ballet of Canada’s Corps de Ballet in 2013.

James will be promoted to first soloist for the 2015/16 season.