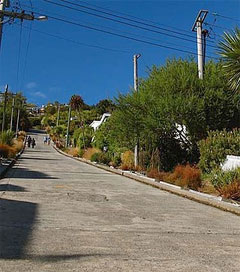 Baldwin Street a Real Doozy of an Incline

Baldwin Street in Dunedin, “the world’s steepest street” is “like candy to my stunt-driver-trapped-in-a-conservative-car-owner’s body,” says Fleur Bainger in the Sydney Morning Herald.

“The entire city is hilly but this particular slope is a doozy – so much so that the townsfolk bounce thousands of chocolate Jaffas down it in a quirky annual competition each July (Cadbury has a factory in town), and melt-prone bitumen has been deemed insufficient surfacing material.

“My plan is to test the mettle of my hired motorhome, revving slowly but surely through the lower gears until I reach the top.

“So I leg it, thinking the rise looks a cinch. A quarter of the way up, I realise it isn’t. I push off at roughly 30 metres above sea level: the peak is 100 metres above and it gets steeper with every step. According to Baldwin Street’s trusty Wikipedia page, ‘For every 2.86 metres travelled horizontally, the elevation changes by one metre’.

“I marvel at the street’s 34 homes that do not seem the least bit vertically challenged. Their fence lines tell another story, flowing like a waterfall to the bottom, alongside 270 steps.

“I am surprised to read that while some other streets may, in fact, be steeper, The Guinness Book of World Records recognises Baldwin for the length of its vertical rise. Size, it seems, does matter.”