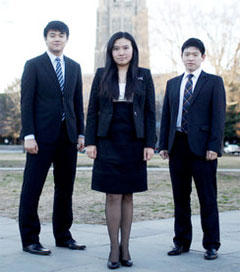 New Zealander Alex Kim (right), a junior at Duke University in the United States, was one of three to win an asset allocation contest sponsored by BlackRock, the world’s largest asset manager. Kim, who majors in economics, told The New York Times that he and his teammates faced the same quandary as most investors: how to generate income while minimizing risk and preserving assets for retirement. They examined model portfolios from Fidelity, Vanguard and BlackRock. “We looked at historical returns for each asset class and then adjusted those for current market conditions,” Kim said. The prize was an interview and a shot at an internship at BlackRock. Kim is waiting to hear if he got one, and said he was aiming for a career in investment banking.