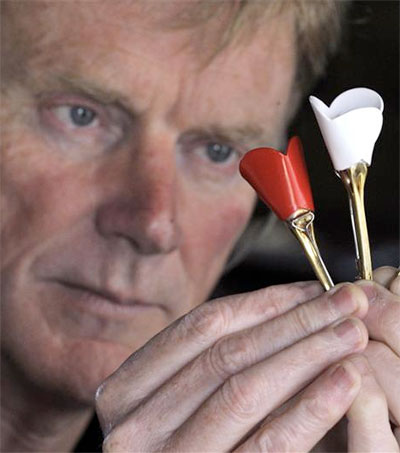 Dunedin jeweller and sculptor Stephen Mulqueen was in Athens, Georgia recently to drum up support for a memorial to one of the American city’s forgotten heroes – humanitarian Moina Michael, the “Poppy Lady.”

Michael made the poppy a worldwide symbol of remembrance for those who died in World War I, inspired by the famous poem “In Flanders Fields” by Canadian doctor John McCrea. The 1915 poem begins, “In Flanders fields the poppies blow/ Between the crosses, row on row.”

Michael’s idea of selling commemorative poppies to help raise money for causes such as disabled veterans caught on, and by the time of her death in 1944, poppy sales had raised more than $200 million for disabled veterans in the United States, Great Britain, Canada, New Zealand and other countries.

Mulqueen first learned of Michael about 14 years ago when he saw poppies marking graves in a World War I battlefield in Belgium.

He has set up a temporary exhibit at the University of Georgia’s Lamar Dodd School of Art as he tries to get the word out about Michael’s legacy.

Trained as a goldsmith, Mulqueen now fashions and sells poppies made out of brass cartridge shells.

“The poppy legacy is just enormous. Moina Michael is remembrance royalty. She is at the base of the [World War I] remembrance tree,” Mulqueen said. “No other community is going to remember her.”