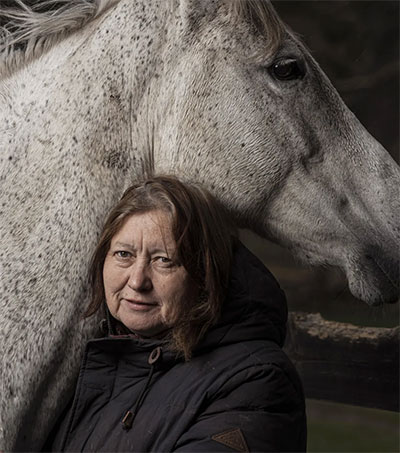 It’s 6pm on a freezing winter’s night, the wind is howling and the rain beating down. In the darkness, New Zealander Anne Young, the president and founder of Victoria’s Horse Shepherd Equine Sanctuary, tries to coax six young rescue horses from their mud-soaked paddock onto higher ground. Author and natural horsemanship practitioner Candida Baker reports from Gordon, 95km west of Melbourne, where Young established the sanctuary in 2014 to rehabilitate and rehome horses.

We bribe them along a laneway with the aid of hay, sprinkled Hansel and Gretel-style, until we finally coax the last reluctant traveller into their new home, Baker writes for a story featured in The Sydney Morning Herald.

We shut the gate and breathe a sigh of relief. There are only the old horses near the house left to feed. Oh, and the two donkeys. And the goat that keeps the pig company. That’s before Young starts on her inside friends, the clan of rescue dogs and cats who share her life alongside the current menagerie of 102 horses, dozens of goats, a few llamas and alpacas, some geese, chickens, a peacock and a “rescue” turkey.

At the sanctuary there are former racehorses and ex-trotters, Clydesdales and brumbies, Shetland ponies and donkeys. Any horse that’s been badly treated and needs refuge is welcome here, subject to space being available. Young and a handful of dedicated volunteers work to bring them back to health, get them comfortable again with humans, then adopt them out, typically to kind people with knowledge of horses who have the patience to deal with the sometimes damaged, easily spooked equine personalities.

“I got into this work in a roundabout way,” says the 58-year-old, who works in Melbourne during the week as a senior executive with a bank. “I grew up on a farm in Ohakune, and we had horses. But I’ve been in banking all my working life, so for many years I didn’t have the chance to be around them. I was transferred from New Zealand to Australia, then sent to Asia, where I lived for some years, mainly in Manila and Singapore. Preventing animal cruelty is not high on most people’s priority list there, and what I saw – dogs in cages, that kind of thing – really affected me. When I came back to Australia, I decided I wanted to do something to improve animal welfare here.”

“I was incredibly naïve about how animal welfare worked,” she continues. “I’ve learnt a lot running the charity, and I’ve come to the conclusion that cruelty is the evil. Not getting a horse a dentist, not getting their feet done, not feeding them properly – all that is just as cruel as giving them a suboptimal end of life.”

Funded by adoption fees and donations, income from a new training facility and money from Young herself, Horse Shepherd works closely with RSPCA Victoria, which sends rescued horses its way.