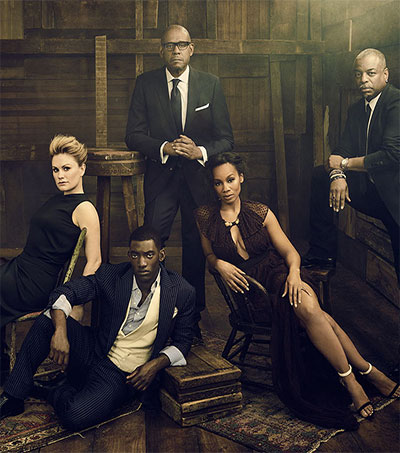 Anna Paquin Returns to the South in Roots

Forty years after the original Roots gripped half the United States, a more violent and more accurate remake is here, the Hollywood Reporter’s Marissa Guthrie writes, gambling on big stars including New Zealander Anna Paquin and Forest Whitaker and the unresolved emotional core of America’s toughest conversation: “He was calling me a n—er, but at the end of the scene he was in tears.”

The four-part, eight-hour series, Roots is a reimagining of the blockbuster 1977 miniseries about several generations of a slave family and airs in the United States on A+E Network.

In early 1977, as ABC was preparing to broadcast Roots, based on Alex Haley’s Pulitzer Prize-winning novel from the previous year, network chief Fred Silverman was so sure it would flop that he jammed it onto the schedule over eight consecutive nights at the end of January. That way, it would be safely off the air before the critical February sweeps period began.

Silverman, obviously, was wrong. More than half of the US population watched at least some part of the miniseries. The final episode, seen by more than 100 million, still ranks among television’s most watched telecasts, and Roots went on to win nine Emmy Awards. It pioneered the docu-melodrama form, fuelled the miniseries craze (The Thorn Birds, Shogun and The Winds of War all followed) and awakened television executives to the potential of African-American subject matter – not to mention the existence of African-American television viewers.

“The race conversation was cooking in Hollywood long before any of it became Twitter hashtagged,” Paquin, 33, says.

In Roots, Paquin plays Nancy Holt, the Quaker fiancé of Confederate officer, Frederick Murray, who has her own agenda when it comes to the handling of slaves.

For Paquin’s performance in Jane Campion’s 1993 film The Piano, she received the Academy Award for Best Supporting Actress at the age of 11, making her the second-youngest Academy Award winner in Oscar history.

Paquin played waitress Sookie Stackhouse in the HBO series True Blood from 2008 to 2014.

Original article by Marissa Guthrie, The Hollywood Reporter, May 25, 2016.