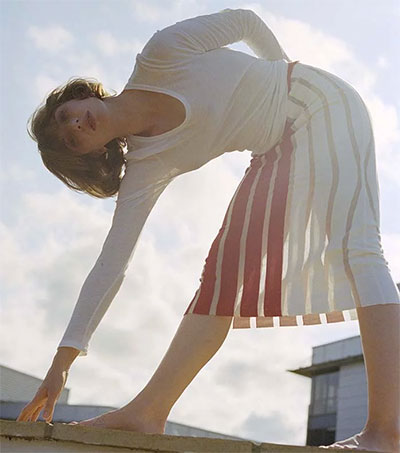 Aldous Harding is happy that her music makes people feel uncertain. The New Zealand-born singer-songwriter recalls a special moment when somebody confessed to her that Designer, Harding’s third record, made them question their taste.

“That was the biggest compliment that I can receive,” Harding tells Canadian music magazine, Exclaim! from her current residence in Cardiff, Wales. “Making somebody wonder whether they have the problem, rather than what my problem is. Not that I want to put people in a bad spot, I just mean there’s room for everything. There’s a path for everything.”

The songs of Designer, like Harding’s previous releases, are ambiguous. In interviews, Harding rarely discloses specifics about the meanings of her songs, which creates space for listeners to interpret them and to reflect on their own experiences.

“Because I’m a nobody, surely it’s an interesting thing or a nice thing to see a nobody or just a regular person do things that makes you question your taste and feel things,” Harding notes. “That’s what I look for in music anyway: I want someone to confuse me to the point where I look inwards rather than at what they’re doing.”

Before taking this past year off, Harding finished a 100-date tour in support of her second record, Party, and immediately went into the studio and recorded Designer in 15 days.

Designer is named ‘Album of the Week’ by Guardian reviewer Alexis Petridis, and awarded four out of five stars.

“Comebacks come no more enigmatic than The Barrel, the first single to be taken from Aldous Harding’s third album, and its accompanying video,” Petridis writes.

“Her lyrics are inscrutable and her vocal and visual stylings eccentric, but Harding’s third album is a thing of beauty.

“Making an album that’s both captivating and indecipherable is no mean feat. What seems like the work of an unbiddable artist, operating according to her own baffling internal logic, turns out to be something rather more finely wrought: the fractured and confusing weighed out against the straightforwardly appealing, the darkness balanced by airy light. It’s a strange world that Harding has created, but it’s also an inviting one.”

Party won two New Zealand Music Awards in 2017 and the Taite Music Prize in 2018. The album was also nominated for IMPALA’s European Album of the Year Award.

Harding is originally from Lyttelton.