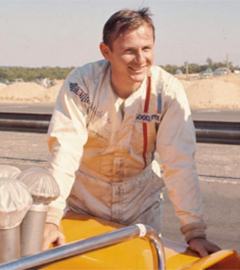 This week marks the 50th anniversary for the legendary racing team established by New Zealand motorsport legend Bruce McLaren and which bore his name. The good folk of Woking, where McLaren established his sporting empire, were marking the occasion at the Norman Foster-designed McLaren Technology Centre, which boasts a boulevard of historic cars, many driven by its famous founder.

To coincide with the landmark anniversary, the company unveiled its first P1, the McLaren hyper car, one of only 375 to be made and which fetch an eye-watering £800,000.

McLaren founded the motor racing team in 1963, which also featured fellow Kiwi motorsport legends Chris Amon and Denny Hulme, who became F1 world champion in 1967. In tribute to his homeland, McLaren adorned the British cars with the “speedy Kiwi” logo.

Today, McLaren Group’s brand director, John Allert, insists that the company is instilled with “the same DNA that Bruce McLaren founded us with”.

His is no idle boast. McLaren Group is big business and despite the blandishments from other richer regions which wanted the kudos of hosting the famous racing brand, the company has stayed loyal to its hometown of Woking, population 92,400.

It is the town’s biggest employer, with jobs for more 2,000 people across its four divisions: McLaren Racing McLaren Automotive, McLaren Electronic Systems and McLaren Applied Technology.