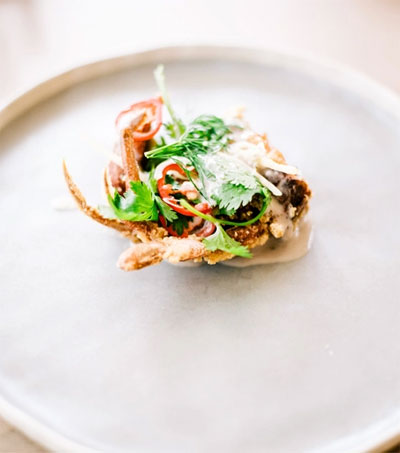 “Those after a foodie holiday might opt for Burgundy or Turin rather than travelling as far as New Zealand. But there are many reasons to head as far as Auckland for an excellent dinner or glass of sauvignon blanc,” British blogger Sophie Murray-Morris suggests in a feature for Metro.co.uk.

“That’s if you do not get distracted by the transcendent beauty of the North Island, boat trips to Waiheke or touring around the inspiration behind epics like Lord of the Rings.”

“Lanna and Isaan cuisine originated in North and North East Thailand and is the basis of the food at Saan (pictured), [a] restaurant in Auckland that can be found amidst the ever expanding cuisine in the Ponsonby Road area. The Isaan province is also famous for its grilled meat and Saan’s Satay Leu, chargrilled wild boar skewers in a coconut and curry paste are a very respectable answer to the area’s passion for all things that are grilled.”

As well as recommending Auckland’s MASU and its sashimi, Murray-Morris dines at TRUE Food & Yoga, Northern Thai restaurant MooChowChow, The Flying Burrito Brothers and Woodpecker Hill, which “specialises in Asian barbecue and really excels at it.”

“Highlights of the menu include the coconut-braised beef short rib bun with ginger and coriander. The beef is sweet and succulent and the entire dish makes you feel like you are anywhere but New Zealand.”

“The portions are also huge, their speciality papaya salad with peanuts and cherry tomatoes is large enough to easily feed two people on its own. You can also see why the fourteen-hour smoked beef brisket with red chilli and a galangal BBQ sauce consistently attracts the local back to the Parnell based restaurant.”