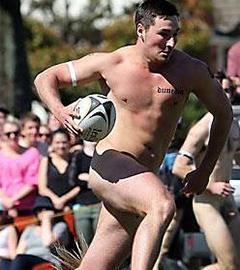 New Zealand blushes were spared in Dunedin, as the Nude Blacks narrowly edged an invitational Australian side in the annual naked rugby contest in the country’s southern-most city. To coincide with the Bledisloe test at the nearby Forsyth Barr stadium, the Nude Blacks took on an Australian outfit bolstered by several local female rugby players, who were clothed.

More than 2000 spectators watched the game, some open-mouthed at the on-field antics. Whether the jaw-dropping was in awe or disbelief is unclear.

The Nude Blacks skipped out to an early lead, courtesy of a new move, dubbed the “Tony Woodcock”.

But some controversial decisions by the referee, his modesty covered by a towelling dressing gown, led to a nail-baiting finish. A series of penalties, including for improperly spooning an opposition player at the ruck, saw the Australians hit back.

Nude rugby, apparently, was the winner on the day.