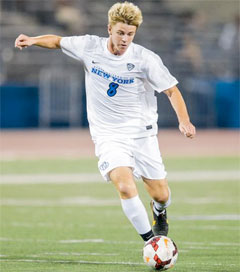 Young Soccer Player off to Flying Start in US

Aucklander Nicolai Berry, 19, is a freshman midfielder for the University of Buffalo (UB), and amid his transition to a new culture in the United States, Berry has excelled on the pitch, according to student paper The Spectrum.

Berry ranks second on the team in points and has started in 12 of 13 games.

Berry began playing soccer at 5 years old, and his talent has led him to play in countries throughout the world including Fiji, France, England and Switzerland. Berry chose UB because of first-year head coach Stu Riddle who is also a native of New Zealand and Berry refers to their relationship as the “Kiwi connection.”

“It’s a very tough adjustment for him,” Riddle said. “I went through it myself coming over. I think he’s done a really good job adjusting and [he’s] fit in really well with the lads. But that’s very typical of New Zealanders. We’re very extroverted people who like to travel and see new things.”