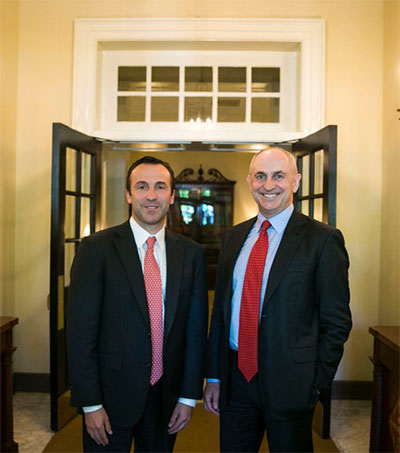 Nearly 300 executives have visited the White House this year, according to a New York Times tabulation, an open-door policy that is a sharp break with the Obama administration and puts corporate chieftains on par with senior lawmakers in the pecking order of who has influence in Washington. One of these “chieftains” is New Zealander Chris Liddell, President Trump’s assistant for strategic initiatives and a former chief financial officer at Microsoft and General Motors.

The relationship-building is acting as a welcome substitute for a lack of legislative accomplishments, and presidential aides suggest the rapport positions Trump for future success.

“The whole idea is, do something with all of this communication and feedback,” Liddell told the New York Times.

“And some of that happened in the first hundred days, but we’re really setting ourselves up for the next thousand days.”

The task of dealing day to day with the chief executives falls largely to Liddell and Reed Cordish (pictured left), a Baltimore real estate scion, who share a cramped office in the West Wing.

In a meeting in early April, a group of 50 or so chief executives involved with the Partnership for New York City proposed adding public housing to Trump’s infrastructure initiative. The idea was recirculated at another trade group meeting about a week later, suggesting that the White House was seriously considering it.

Some of the infrastructure changes under consideration would improve the government’s own inner workings, including at the White House itself. “A lot of technology here is 20 years out of date,” Liddell said.

Liddell, 59, is originally from Matamata. He holds a Bachelor of Engineering degree with honours from the University of Auckland and a Master of Philosophy degree from Oxford University in England.