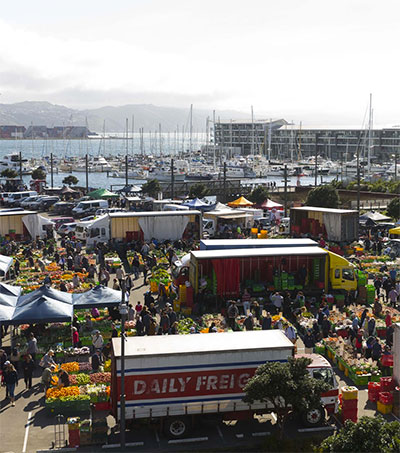 “In addition to being home to a wealth of parks, the national museum Te Papa and movie prop studio Weta Cave, not to mention charming harbour fronts and beaches, [Wellington] is a true food lover’s haven,” Leanne Mirandilla writes for Singapore Tatler.

“The F&B scene is constantly innovating to keep up with the shifting tastes of the discerning locals, so whether you’re looking for international contemporary fine dines or artisanal hole-in-the-walls, you’re likely to find something to your taste.”

Mirandilla dines at a number of restaurants, sups on some craft beer and takes in the Sunday waterfront market, where “visitors can munch on roti wraps and other dishes from the food trucks, washing it down with cold brew coffee”. The following are some of the other establishments recommended in the article.

“The Crab Shack is a casual eatery perched on sunny Queen’s Wharf that serves up tortillas, burgers, pastas, and a variety of sharing plates. But its focus, as its name would suggest, is on seafood, particularly its namesake crab. The quirky interiors drive home the coastal vibe – think plenty of light, paint-brushed woods with pendant lights that look as though they’re made from fishing nets.

“Wellington is an excellent base for explorations further afield, especially if you’re interested in visiting national parks such as Nga Manu Nature Reserve. On the drive over, make a stop at L’Amour En Cage bakery and deli for breakfast. A gastronomic gem in the serene Raumati Beach Village.”