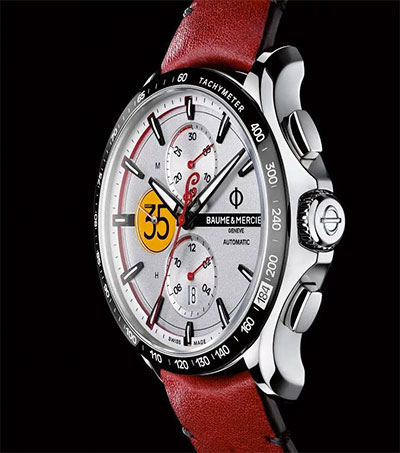 The Burt Munro tribute watch by Baume & Mercier honours the New Zealander who spent more than four decades working on a 1920 Indian Scout and in 1967, at age 68, used it to set a speed record at the Bonneville Salt Flats in Utah.

Watch brands often see history as marketing gold. It’s certainly one reason Baume & Mercier is partnering on a series of chronographs with Indian Motorcycle, founded in 1901 and the oldest motorcycle company in the United States.

The first fruit of the deal, a $3750 Burt Munro tribute watch based on the Clifton Club chronograph model, was introduced earlier this month at the EICMA motorcycle show in Milan.

The watch dial has a yellow roundel with a bold number 35, Munro’s lucky number; a sandblasted finish to evoke the surface of the Bonneville Salt Flats; and a seconds hand with a counterbalance in the shape of the stylised Indian “I.”

The calfskin strap is dyed a shade of red typically found on vintage Indian machines, while the case back has the motorcycle brand’s headdress logo and an edition number. A total of 1967 will be made, a quantity chosen to commemorate Munro’s record-breaking year.

“Indian is such a historic marque with so many great achievements to its name, and the story of Burt Munro is an incredible one that, I think, will really appeal to people.

“It is a great combination of determination, heritage, adventure and engineering.”