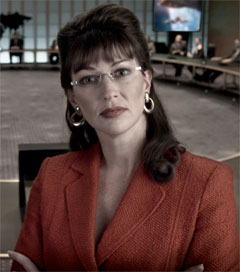 New Zealand-born actress Stephanie Paul stars as the as the Palin-esque president of the United States, out to save the world in the German-Finnish-Australian thriller Iron Sky, which premiered in Berlin on 11 February. “The character of the president in Iron Sky is very concerned with working out in the Oval Office and with votes,” Paul explains. “So not only does she send a black male model to the moon for a publicity stunt (he comes back white), she gets excited about the prospect of the Germans attacking Earth because it makes her a ‘wartime president.’ Statistics show that all presidents who start a war get re-elected, or so she states in the film.”