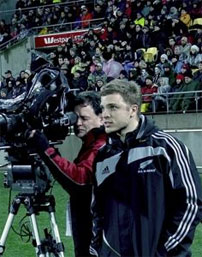 Award-winning Wellington-born filmmaker Julian Shaw’s “emotive” 211 documentary Cup of Dreams is recommended to Australians so they may gain some insights on how the All Blacks can be beaten in the Rugby World Cup. Shaw’s film “is made well” The Canberra Times’ Robert Messenger writes, describing the premise of Cup of Dreams as “about how New Zealanders deal with their deep, abiding fears of dashed expectations.” “The film came to be about identity and belonging,” Shaw says. “And in that way, it changed from being a sporting film into a portrait of New Zealand and New Zealanders, a close, revealing look at the underbelly of New Zealand.” Shaw, who is 25, is best known for directing the 27 film Darling! The Pieter-Dirk Uys Story, a BFI-winning documentary about the life of South African political satirist Pieter-Dirk Uys. Shaw is also the author of the novel Modern Odysseus. He is based in Sydney where he is studying directing at the Australian Film School.