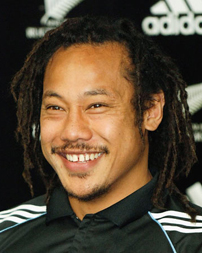 Towering Leader at Inside Centre

Tana Umaga is named at inside centre for the Telegraph series ‘Greatest Rugby World Cup XV’. “[Umaga’s] status as a towering leader is not in doubt, as he captained the side to 19 wins out of 21 matches from 24 to 25,” Ed Richardson writes. “In 24, he was made All Blacks captain and in 25 led the side to victory over the Lions, the Tri Nations championship and a Northern Hemisphere Grand Slam, before surprisingly retiring from internationals in November 25. While Umaga may have wished for greater success in the [23] World Cup, his international career still sparkles with personal and collective accolades.” Umaga was born in Lower Hutt in 1973. He was named in the Chiefs’ starting line-up for their inaugural Super Rugby fixture of the 211 season to face the ACT Brumbies.