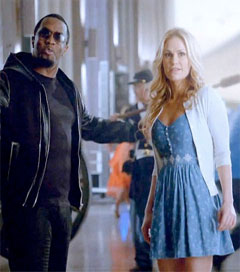 New Zealand-raised Paquin and Moyer stayed true to their True Blood characters, while Diddy played the role of the fast-talking, slick-looking host guiding them on a behind-the-scenes tour of Time Warner Cable revealing what the cable network has cooking for viewers.

The couple look amazed as they follow Diddy who guides them through different scenes and talks up a storm about what viewers can expect from the cable company, including their favorite shows and high speed Internet.

They encounter Jimmy Fallen, The Food Network’s Anne Burrell making a dish, the guys from Duck Dynasty, Liev Schreiber and others.

Paquin is smitten when she spots Drake.