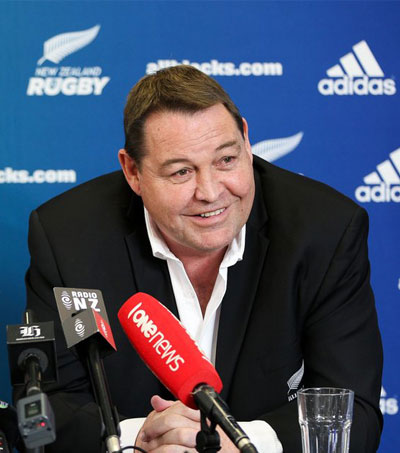 Steve Hansen Re-Signs with All Blacks

World Cup winning coach Steve Hansen has re-signed with the All Blacks through until 2019, as reported on Fox Sports.

“New Zealand Rugby chief executive Steve Tew said the board unanimously voted to extend Hansen’s contract with the All Blacks.”

“Steve’s winning record is unsurpassed in the modern era. Since becoming Head Coach in 2012, he has recorded 52 wins in his 57 Tests to date, with two draws and just three losses. That’s remarkable and unparalleled in international rugby,” said Tew.

Hansen acknowledged that the decision to re-sign with New Zealand Rugby wasn’t an easy one, according to the article.

“It was never going to be an easy decision nor a foregone conclusion that I would extend my contract. In speaking to my family, they’ve all given me their wholehearted support and I’m very thankful for that, because you just couldn’t do this job without that,” said Hansen.

He explained that he had to ask himself three questions when considering whether or not he should re-sign.

“I had to be confident, firstly, in my own mind that I still had the passion, drive and commitment to keep pushing this team to improve and be better. The second question I had asked myself was: could I improve as a coach? And I believe I can, and must, as I will be asking others to do the same,” he said.

“With regards to the team, I spoke to a number of players and management to get their thoughts on what would be right for the team going forward and I received unanimous feedback from them that it was right for me to continue.

“Once I had confirmed all three of those considerations, it really was a ‘no brainer’ to continue, because, as a coach, there is no better job in rugby than coaching your own national team, particularly one that is as successful as this All Blacks team has been,” he said.

“Once again, I’m incredibly grateful for the opportunity to be part of the All Blacks team and looking forward to the next four years.”