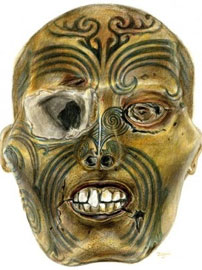 A mummified and tattooed Maori head has been returned to New Zealand after spending 136 years in a Normandy museum. This is the first to be returned of a total of 16 in France. Representatives of New Zealand Maori sang traditional songs during an elaborate ceremony at Rouen City Hall to hand over the head to New Zealand diplomats. “It’s truly a solemn and symbolic day,” New Zealand ambassador Rosemary Banks said. “We are very happy at the return.” For years, New Zealand has sought the return of Maori heads kept in collections abroad, many of which were obtained by Westerners in exchange for weapons and other goods. Little is known about how the Rouen Museum acquired a Maori head in 1875, offered by a Parisian named Drouet. So far Te Papa has repatriated more than 180 ancestral remains from 12 countries. Museum officials estimate that there are still more than 500 around the world.