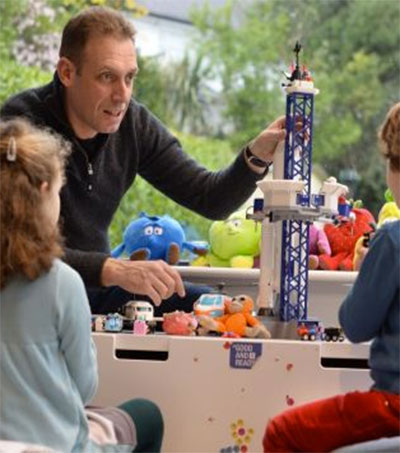 The overwhelming concern of most new parents after they get home from the maternity hospital is will they be able to keep their tiny infant alive, The Irish Times reports. It’s no wonder that being a doctor is regarded – by non-medics anyway – as a big advantage in parenting. What does Ireland-based consultant endocrinologist, and father, New Zealander Dr Matt Widdowson have to say?

Shift work as a hospital doctor helps prepare you for the sleep deprivation of early parenthood, says Widdowson, who has worked in Ireland for more than 16 years, most recently at Tallaght University Hospital.

“You are used to multiple wakenings and having to be relatively responsible in your actions,” Widdowson says. He also believes his training has made him a little more relaxed about parenting from a health perspective.

“I would be relatively laid back but I think being a doctor has meant that I am a bit more comfortable with standard childhood illnesses and don’t go to the GP quite as quickly.” His wife is also a health professional, a physiotherapist, and, aside from routine vaccinations, their youngest child didn’t attend a GP until he was three. However, he acknowledges they have been blessed that both children haven’t had much more than common colds.

“Living it yourself and seeing the stresses and strains and the sleep deprivation and what it takes just to get the children out to school in the morning – as well as both getting to work yourselves – does give you an understanding of what the person in the bed in front of you is going through.”

It means he is more likely to take heed of what is going on in someone’s background and be more realistic in his advice. “If you just put it to them, ‘this is what you should do and off you go’, they are going to be more stressed leaving than when they were coming in, so it is counter-productive.”

He tries to develop a rapport with patients who have children, by asking them what age they are. “If they are about the same age as mine or a bit older, I will tell them I have a six-year-old and a four-year-old and you can almost see it in their face that you understand where they’re coming from.”