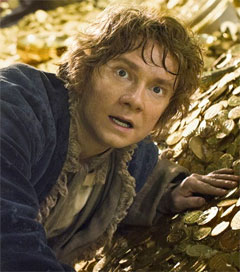 New Zealand filmmaker Peter Jackson has given his fans a sneak online preview of the next Hobbit installment, The Desolation of Smaug. Enthusiastic and barefoot, Jackson gave a little masterclass in Middle-earth filmmaking and showed fans their first look at the second film in the trilogy. With New Zealand actor Jed Brophy, who plays the dwarf Nori, Jackson gave a tour of key spots in his Wellington post-production studio and introduced footage to those who bought the Blu-ray and DVD this past week. With live-streaming cameras, he also dropped by the motion-capture room where Manu Bennett was working on a scene playing the chief orc Azog, looking “more friendly than he is in the movie,” Jackson said.