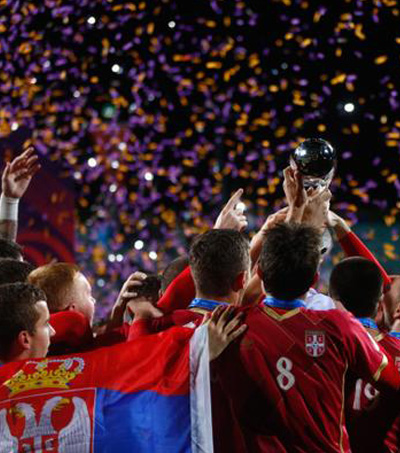 In the 70th minute Stanisa Mandic scored the first goal for his team. Their historic victory was made official with Nemanja Maksimovic’s goal two minutes before the end of extra-time.

“Serbia’s goalkeeper Predrag Rajkovic, who took the Golden Glove award, was the difference. He was momentous”, writes Michael Burgess for The New Zealand Herald.

“Brazil dominated throughout the match at Auckland’s North Harbour Stadium on Saturday, and had more than 60 per cent of the possession, but could not convert their chances when it really mattered”, according to Sarah Harvey for Stuff.co.nz.

“Brazil is a great team, an amazing team. They deserve this trophy too. We really want to congratulate them for the football and the game they played”, said Paunovic.

“This generation has many very good players who will play the biggest matches representing the country and the best clubs in the world,” said Veljko Paunovic, Serbia’s national team coach.

It is reported that “the winners, considered outsiders at the beginning of the championship, became overwhelmed with joy and received the cup showered with confetti, chanting and singing ‘We love you Serbia’.”

The sold-out final brought the total Auckland crowd to an estimated 100,000 fans – not bad for a city of almost 1.4 million people in a land where rugby usually has the upper hand.

Brazil took home the second and Mali the third place in the championship in New Zealand.