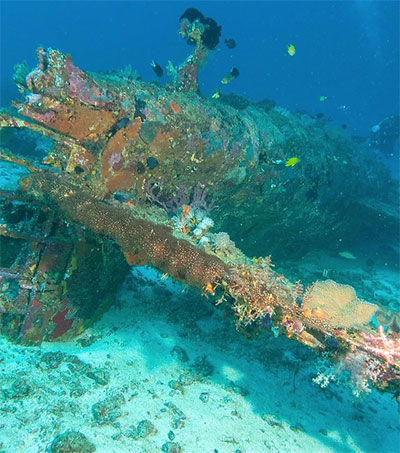 “The nature of [World War Two], scattered as it was across thousands of miles of sea and sand, meant that many people, ships, and aircraft disappeared without a trace,” BC Cook writes for Marianas Variety. “One organisation devoted to shrinking that list is [New Zealand-founded] Sealark Exploration.”

“Operating out of New Zealand, Sealark works to locate as many remains and wrecks as they can to repatriate fallen servicemen and solve mysteries,” Cook writes for the Saipan-based newspaper. “Sealark will go anywhere in the Pacific their research takes them, but their primary area of interest is the Solomon Islands, New Guinea, and Vanuatu, settings for some of the most vicious fighting in the whole Pacific War.”

According to the company’s website: “Sealark Exploration was borne from a friendship developed between a Commander in the Royal New Zealand Navy Reserve, Matt Wray, and military historian Ewan Stevenson whilst on a mission in the Solomon Islands.”