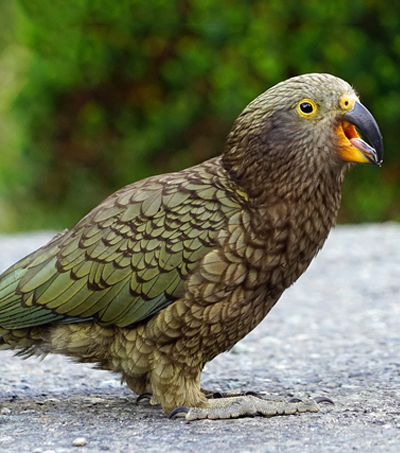 To try to keep New Zealand’s Mountain Parrots “out of harm’s way, conservationists have developed roadside kea gyms which is equipped with ladders, spinning flotation devices, swings and climbing frames,” as reported in an article for The Financial Express.

New Zealand’s Kea “are always on the lookout for mischief” and one of New Zealand’s “few wild birds that actually seek out humans.”

“Although kea are not known to ‘talk’ like some other parrots, they’re considered to be as smart as a four year old child and have intelligence similar to primates.”

The idea of gyms for the birds “began after road workers were left puzzled when they found road cones in odd places each time they returned to work at the Homer Tunnel at the entrance to world heritage site Milford Sound. When the road crews checked CCTV footage, they discovered that a group of kea were responsible for shifting the cones,” reports the article.

Infrastructure services company Downer which maintains the highway “supported the installation of a kea roadside gym” and monitors it with cameras so that researchers from the University of Canterbury can analyse kea behaviour.”

There are “only about 5,000 kea remaining in the wild,” “the birds are listed as nationally endangered and their numbers are decreasing.”

“Introduced species such as stoats, possums and feral cats are raiding their ground-based nests,” the birds’ penchant for lead poisons many birds and contact with humans, such as being hit by cars or being fed inappropriate food.

“The kea gyms are designed to draw kea away from risk areas such as roads. Hopefully they will reduce the likelihood of kea damaging human property by providing other areas of interest,” said Orr-Walker.

“It is also hoped that the gyms will provide an opportunity to educate people about not feeding kea and the importance of protecting our remnant kea populations. If you love our cheeky mountain parrots, don’t give them a death sentence by feeding them.”