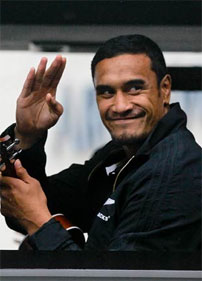 All Blacks loose forward Jerome Kaino, 28, was named New Zealand player of the year at the Steinlager Rugby Awards held in Auckland. Kaino played all but 55 seconds of New Zealand’s seven World Cup matches, being substituted only once. All Blacks captain Richie McCaw described the hardworking back-rower as “a rock.” “He’s a soldier,” McCaw said. “But more than that, he was the guy leading the way with his physicality.” World Cup-winning coach Graham Henry was named coach of the year. Kaino was born in American Samoa. He attended Papakura High School. In 2004, he was named IRB International Under-21 player of the year.