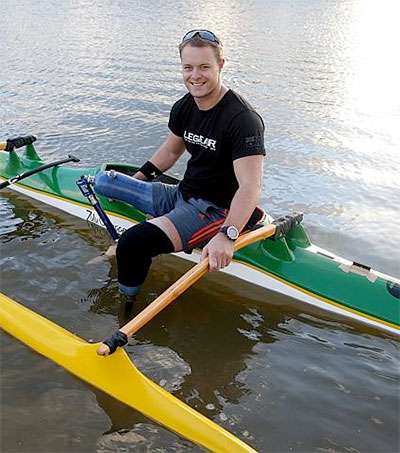 McGrath, a sapper with the Royal Australian Engineers Corps, lost both his legs in Afghanistan in August 2012 when an improvised explosive device, laid by the Taliban, exploded beneath him.

After winning the paracanoeing V1 200 gold medal at the world titles in Moscow in world record time, McGrath said: “Even when I was on the stretcher getting carried to the medevac chopper I said I was going to be in the Paralympics and this is the first step.”

McGrath lives on the Gold Coast and trains at Varsity Lakes.

He took up paracanoeing in December 2013 and won the first V1 200 paracanoe event he contested at an Australian championships.

With his father, he also completed a 1000km paddle to raise funds for the Mates4Mates organisation, which provides financial support for injured ex-servicemen and women.

McGrath’s long-term sporting plan is the Rio Paralympics in 2016.