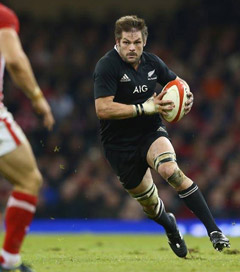 Our Inimitable All Black Captain

Captain “fantastic” Richie McCaw has led the “all-conquering All Blacks” to a 20th successive match without defeat beating Wales 33-10 at the Millenium Stadium in Cardiff. No player in world rugby is better in the back-to-back performance department than the man who guided New Zealand to victory in the World Cup a year ago while virtually on one leg. McCaw, 31, was at his magnificent best on 24 November. It was McCaw’s 102nd win in 115 Tests as an All Black. Although the All Blacks were then stunned by a strong English side 38-21 at Twickenham, McCaw was upbeat about his team’s loss. “You’re prepared for a big battle and that’s the way it was, they caught us on the hop,” McCaw said. “They’re a good team and they took their chances.”