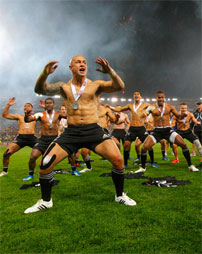 New Zealand has won the fourth leg of the IRB Sevens World Series beating arch-rivals Fiji 24-7 in Wellington. The withering burst of 24 unanswered points in five minutes gave New Zealand a victory and a clear lead in the series with 73 points, ahead of Fiji on 70 with five rounds remaining after both sides went into the tournament as co-leaders on 51 points. New Zealand, who were defending their home title, took five minutes to get their first points on the board but thereafter they never looked like losing. Coach Gordon Tietjens said it was New Zealand’s defensive effort that made the difference. “Our defence was outstanding. We turned it into a lot of pressure and forced them into mistakes,” said Tietjens who sees New Zealand on track to claim a remarkable 10th world crown in the 13-year history of the tournament.