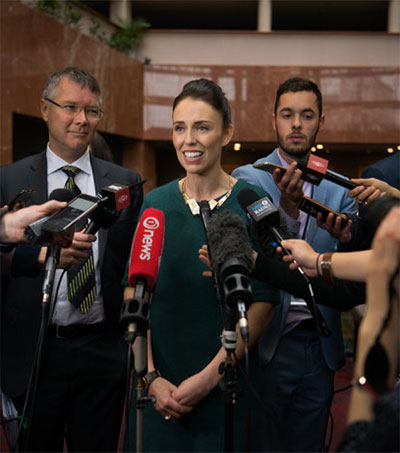 No one had expected New Zealand’s 23 September election to be much of a contest. The conservatives were expected to win, again. But that was before Jacinda Ardern and a wave of support that’s now called “Jacindamania.” The New York Times investigates.

Ardern, 37, is Labour’s youngest leader ever, as at home on social media as she is in policy debates. And she has already attracted global attention for condemning a television commentator’s question about whether employers have a right to know whether a woman plans to become a parent.

“That is unacceptable in 2017,” she told him. “It is the woman’s decision about when they choose to have children.”

Her main achievement, however, may be disrupting an election that had been seen as a surefire win for the conservative National Party.

A rising star in Labour since joining Parliament in 2008 as its youngest sitting member, Ardern is unconventional, accessible and ambitious.

In an interview with the New York Times last month, she answered questions carefully but also joked about the stress of her new position. The number of days until the election, she said, is written in her diary “like a horrific countdown to Armageddon.”

On Twitter, she has 80,000 followers, more than anyone else in the country’s Parliament. She once performed as a DJ at a music festival. Her most scandalous moment in public life so far involved her attempt to install her own bathroom rather than hiring a professional to do it, drawing disapproval from a national plumbers’ board.

Grant Robertson, the party’s finance spokesman and a close friend, recalled sharing a small office with Ardern in 2005 when they were both advisers to Helen Clark, the prime minister at the time who was the country’s first elected female leader.

Ardern was “unflappable,” Robertson said. “She was a person that took seriously everything she did in her working life, and I didn’t get a sense she was there to aim for a particular position. She was just doing the job that had been put in front of her.”

Some political experts question whether Ardern has the experience needed. She has spent her career in the opposition and has not championed a bill in Parliament.

“The question will be whether she can add the substance and steel that New Zealanders may look for in a leader of their country,” Professor Andrew Geddis, a professor at the law school of the University of Otago, said.

Ardern said that she relishes the challenge. “I’m actually enjoying the chance to demonstrate that I have in my heart and always will be a policy wonk,” she said.