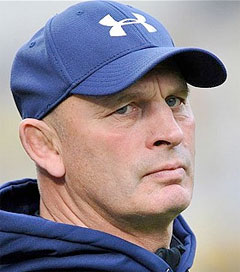 The appointment of Vern Cotter as next head coach of Scotland is testament to the quality of rugby coaches that have been developed in New Zealand, according to Steve Hansen. The 51-year-old’s appointment means New Zealanders are now in charge at three of the four home nations. “I think we’re seeing a pattern. If you’re a New Zealander you’re going to be an international coach,” Hansen said. “What sides aren’t we coaching? So that’s a huge pat on the back for the New Zealand system.” Cotter, Joe Schmidt and Warren Gatland are not the only New Zealand coaches plying their trade with international sides, with Cotter’s former boss at the Canterbury Crusaders, Robbie Deans, in charge of Australia, while Kieran Crowley is in Canada. Current Auckland Blues coach John Kirwan led both Italy and Japan before he returned home with an eye on one day applying for the All Blacks job, while Hansen and predecessor Graham Henry both coached Wales. It should not be a surprise that coaches head offshore to further their careers. Coaching jobs are limited in New Zealand with less than 100 potential full-time jobs available as a head or assistant coach. Outside the national team set-up there are only five professional sides, who all play in the southern hemisphere’s Super Rugby competition. The country’s vaunted provincial competition, a breeding ground for New Zealand’s conveyer belt of talent into Super Rugby, has 26 teams in three divisions but just 14 are, at best, semi-professional. Hansen added: “Do you have to have coached internationally before you coach the All Blacks? No. I think someone like (current assistant and former Waikato Chiefs coach) Ian Foster will make a great All Blacks coach one day.” The Scottish Rugby Union chief executive Mark Dodson, said: “Vern is rightly regarded as one of the top coaches in the world and to have secured someone of his calibre is a coup for Scotland.” Cotter spent 10 years playing for Auckland in New Zealand before representing a number of clubs in France. In 2006, Cotter was made head coach of Clermont Auvergne and lead the side from the 2006–07 Top 14 season through to the 2013–14 Top 14 season. Cotter begins his role with Scotland in June 2014.