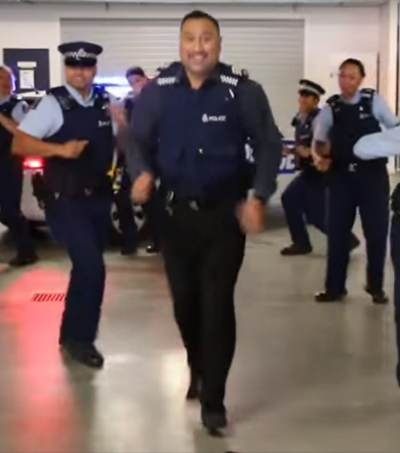 “The New Zealand police force has released a video of officers doing the “running man” dance and issued a challenge to other forces around the world to do the same in an unorthodox recruitment drive,” as reported in The Guardian.

The #runningmanchallenge clip is part of a year-long recruitment campaign by the New Zealand police force, which aims to sign up 400 new officers by the end of 2016, particularly of Maori, Pacific Island, Asian, Middle Eastern and Indian descent.

“We catch people on the run every day, this was a new #runningmanchallenge for our team,” read the Facebook post accompanying the video, which has been viewed nearly four million times (Tuesday).

“If we can make someone laugh on the street, that makes our job so much easier,” said Sergeant Sonny Joseph Iosefo, the 43-year-old star of the clip.

“We are trying to get away from the stereotypes the public hold about police officers, that they can’t talk to us, that we are really serious people. We want people to know that we are humans too, we have families, we have children, and some of us love to dance.”

“We want a diverse force that is part of the community, not just policing it.”