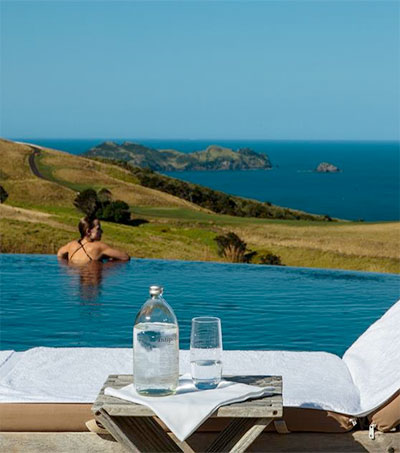 The best present you could give your mother would be a “trip of a lifetime” to New Zealand, Los Angeles Times correspondent Amanda Jones recommends in an article featuring “über-luxe lodge” Kauri Cliffs, the “elegant” Farm at Cape Kidnappers and boutique hotel Matakauri Lodge.

“[The] three ‘superlodges’ [are] owned by an American who is said to have taken New Zealand luxury to new heights and was doing great things to preserve some of my birth country’s flora and fauna,” Jones writes.

“All three lodges were in parts of the country that meant something to my mother. One was in the Bay of Islands in the north of North Island, a sunny, beach-lined area where my parents would sail when my father was alive. The next was in Hawke’s Bay, on the central-eastern coast of North Island, a genteel farming and vineyard region where my mother attended boarding school. The third was outside Queenstown, where my parents took their last trip together …

“ … On our last day [in Queenstown], a helicopter trip – the pièce de résistance. If you are ever going to splurge on a helicopter ride, this is a great place to do it. Paul Mitchell, owner of Heli Tours, flew us over the Remarkables and vast inland sheep stations, then landed beside a glacier and then by an alpine lake where we could take photos. By lunchtime, we ended up with a bottle of wine and a picnic on a remote point overlooking Lake Wakatipu. As I looked at my mother I realised that no one is ever too old for natural beauty. In fact, we need it to stay young. Natural beauty and time, those are the gifts we should care about.”