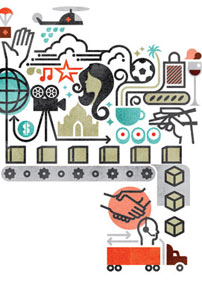 Low On Brands, High On Beauty

For the first time, New Zealand is included in Monocle’s index of the top 30 soft power nations, coming in at number 17 and introduced as: “Low on brands, high on beauty and in between on political influence.” “Hobbits and rugby. No one likes it when their country gets boiled down to two or three bullet points, but at least New Zealand can rely on some well-known staples to give its brand a boost. The successful hosting of the recent Rugby World Cup showed the country’s best side — fiercely competitive on the pitch, friendly and welcoming off it.” Monocle’s “fix”: “New Zealand could play a stronger role within the Asia/Australia region — from aid in East Timor to trade across southeast Asia.”