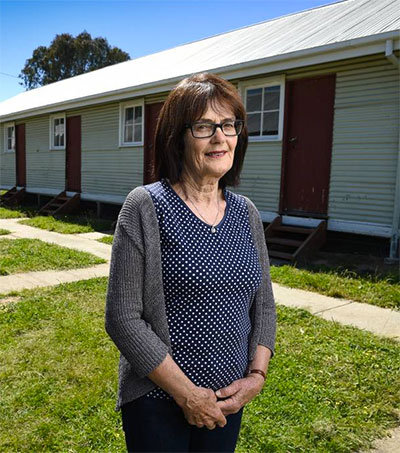 A New Zealander who had become a Swiss citizen, Lois Salvisberg perhaps wasn’t a typical new arrival to Australia’s Bonegilla Migrant Reception and Training Centre in 1969. “I didn’t mind it, we were used to camping,” she said.

“The food was good, we actually had a French cook where we were. I had never been to Australia, but it wasn’t that daunting.”

As millions of people left Europe seeking a new life after World War II, an army camp at Bonegilla was transformed into a migrant reception and training centre.

New arrivals, many of whom spoke little English, lived there while they were processed and allocated jobs.

Salvisberg, her Swiss husband and their two children, aged one and two, spent several weeks at Bonegilla before moving to first Perth, then Mount Isa for work. Daily life at the centre was busy and the shared facilities sometimes basic.

A volunteer at Bonegilla Migrant Experience for the past six years, she will join its main 70th anniversary celebrations on 18 November. The event will feature mini-museum exhibitions, live music, an author talk, performances and European-style food.