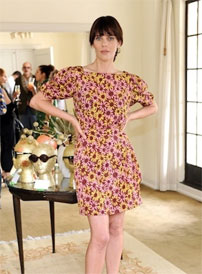 New Zealand eyewear, clothing and jewellery designer Karen Walker – who was recently in Los Angeles to show her 2012 Little Aliens sunglasses collection at the West Hollywood hotel Chateau Marmont – talked to The Hollywood Reporter about the soaring popularity of her shades with celebrities. “Her whimsy and imagination really show in her glasses,” Merle Ginsberg writes. “No wonder Rihanna is her biggest fan and has been photographed in Karen Walker eyewear constantly in the last month. ‘We wanted every single piece to be strong, modern and energetic,’ Walker says. ‘They’re big in L.A., and in Japan, Australia, Korea, the U.K., Italy – the eyewear is in 25 countries. The clothing is in about 180 stores worldwide.’ ‘We’ve been doing the fine jewellery for about eight years. We actually have a line of homewear that will hit stores this August – four beach towels, and linens in prints and colours.’”