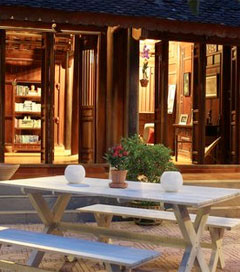 Life Behind Many Doors in a Vintage Ho Chi Minh Home

New Zealand engineer Rick Stockley and his wife Rosie Pollard, 30, a choreographer, were not planning to move in October 2011, but a surprise offer prompted them to reconsider. Some acquaintances were going to Shanghai, and the vintage wooden house that they had been renting in Ho Chi Minh City was going to be available. Would Stockley and Pollard, who were living in a rented villa in a more central part of the city, be interested? “It was too good an opportunity to pass up,” Stockley said. So about a month later, they broke their lease and began buying wooden chairs and tables at vintage furniture warehouses. The home, which covers about 200 square metres is actually a combination of two wooden houses that were transported in 2002 from villages in the northern province of Hoa Binh, near Hanoi. Phan Tu, the builder who moved the houses by truck nearly 2000km, says relocating rural homes to urban centres is his specialty. “The houses are beautiful, and I want to help keep them alive,” Tu said. The house has five rooms: a living area, study, two bedrooms and the new kitchen. Stockley and Pollard, who are planning to marry in August, have added personal touches like the artwork they purchased in Myanmar and several Middle Eastern countries, and a living-room cabinet that holds Stockley’s record collection. The only way to move from one room to another is to step outside and walk along a tiled path that is sheltered by the roof eaves, intricately carved with representations of lotus flowers. The adjacent courtyard has a picnic table, a stone Buddha statue, flowering orchids and a small grove of banana trees. Stockley says one of trees usually fruits every few months. The couple, who met in Dubai in 2006, agree that the biggest annoyance is having to close a total of 10 doors, 6 in the living area alone, every time they leave the property. “We do have a lot of conversations about doors,” Pollard said.