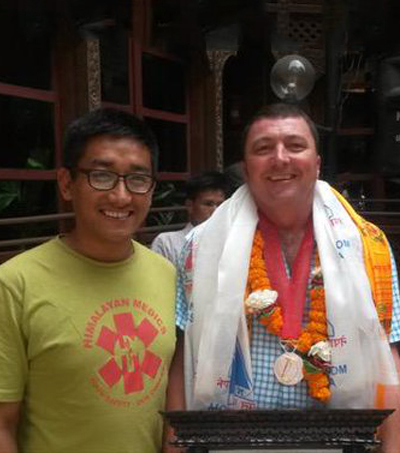 New Zealand helicopter pilot Jason Laing has been honoured with this year’s Appareo Pilot of the Year Award. The pilot is best known for his work in the aftermath of last April’s earthquake in Nepal.

After the 7.8-magnitude earthquake struck last year, the highly respected high-altitude pilot “flew sorties to airlift many trapped climbers and their Sherpa guides out from camps one and two on Mt Everest after the huge avalanche that devastated the summit’s south base camp.”

“I’d just got back to my hotel and was getting ready to come into work,” said Laing.

“I was on the sixth floor when the quake hit. The building didn’t fall down but it was extensively damaged. I was very lucky to get out alive.”

Laing immediately headed to Kathmandu Airport to help survey the damage from above. When he discovered “massive loss of life”, he returned to base to start a major rescue effort.

“We went up to the Langtang area. There were massive avalanches everywhere. It was total devastation. There were whole villages just gone,” he said.

The Queenstown pilot also has been honoured with the Kumar Khadga Bikram Adventurous Award from the Nepal Mountaineering Association and the Fédération Aéronautique Internationale Diploma for Outstanding Airmanship.

Jason Laing is a New Zealand helicopter pilot with more than 5,000 hours of mountain flying experience, who has been honoured for his rescue efforts in the aftermath of the Nepal earthquake. The Kiwi also works with the Himalayan Trust set up by Sir Edmund Hillary to rebuild Sherpa villages and to raise money to stage mountain rescue equipment at Everest above the ice falls”.