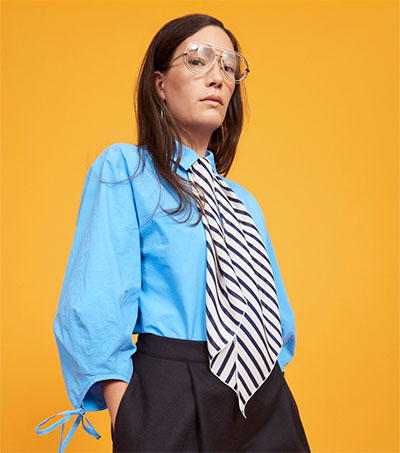 “One glance at [New Zealand-born] Karen Walker’s fall look book elicited key words such as joy, utility, nautical and men’s wear,” Andrew Shang writes in a review for Women Wear’s Daily. “But you’d be hard-pressed to find any signs of ‘Mutiny,’ the actual title of the collection.

“Yet therein lies the theme of embracing rebellion and utilitarian needs, leaving all else behind in times of political turmoil. Who better to reference than the ultimate mutineers – pirates – when telling a story about sparse living, a defiant spirit and eclectic gender-borrowing style?

“As an expression of solidarity and loyalty to her workers, the designer used her own ‘pirate crew’ of employees, including people in design and production to patternmakers and dispatchers, as models for the campaign, which was shot in New Zealand.

“She looked to German Renaissance artist Albrecht Dürer’s apocalyptic ‘Ship of Fools’ for inspiration, also applying nautical and baroque motifs onto simple utilitarian silhouettes in a palette of navy, white, terracotta and orange and pinstripe and polka dot patterns.

“Walker tends to borrow from men’s wear, this season with loosely cut outerwear, tailored trousers, shirting and rigid unwashed denim. The denim, fashioned into jackets, baggy jeans, dresses and editorial-friendly tops with shoulder bows and frayed hems, provided weight to the collection. Long, drawstring ties and ruching on sleeves were the tether to more feminine elements. And if the message of rebellion could be easily overlooked in the refined lineup, the designer made sure to splash the word ‘mutiny’ onto T-shirts and button-downs to get the conversation going.”