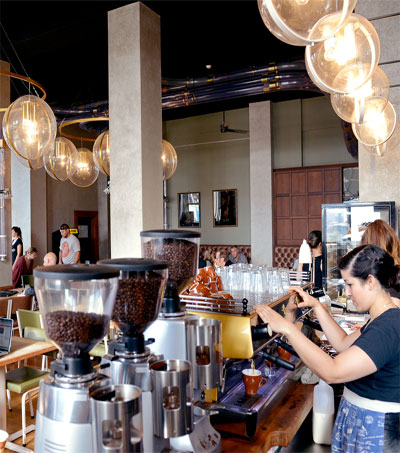 Like many entrepreneurs, artists, designers and other hardy residents who have chosen to stay in the city after the February 2011 earthquake, the owner of C1 Espresso Sam Crofskey was determined to see Christchurch rebound — and become a better city than it was before.

Crofskey believes pre-quake Christchurch was a staid place in steady decline, but there’s now opportunity for not just revival, but also innovation.

“I want people to say, the best cafe in the world is in this city called Christchurch,” Crofskey said. “They were destroyed, they were on their knees and they got back up and they did it again.”

New Zealand is accustomed to earthquakes, but few have been as destructive as the 6.3-magnitude tremor that hit Christchurch, the South Island’s largest city. The central business district, which was cordoned off from the public for more than two years, still looks like a war zone.

Yet amid such scenes of desolation are flashes of artistic whimsy. On one block, an impromptu installation called the Sound Garden has been set up, with chimes fashioned from hollowed-out fire extinguishers and a rain stick made from a pipe filled with wooden beads and rubber balls. Across the street is something called a Dance-O-Mat – an open-air dance floor with speakers and a disco ball where passers-by are invited to drop a coin into a washing machine, plug in their smartphones and get down in front of construction workers for a half-hour.

Slowly, life is returning to Christchurch, in part thanks to creative endeavours like these. “The city is irreversibly different and irreversibly changed. It’s mostly gone,” said Coralie Winn, a co-founder of Gap Filler, a collaborative group formed after the earthquakes of 2010 and 2011 to develop innovative ways to make temporary use of empty city spaces, including the Sound Garden and Dance-O-Mat.

Photo by Arno Gasteiger for The New York Times.