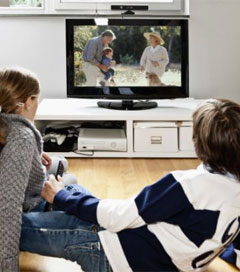 Otago University Professor Bob Hancox has found that the risk of having a criminal conviction in adulthood increases with every hour that children spend watching TV. The New Zealand study followed a group of 1,000 children born in Dunedin from 1972-73. Every two years between the ages of five and 15, they were asked how much TV they had watched. Hancox and colleague Lindsay Robertson found that those who watched the most TV were more likely to have a criminal conviction – and were more likely to develop anti-social traits in adulthood. Speaking to Mark Prigg of The Daily Mail, Professor Hancox said that, ‘while we are not saying that television causes all anti-social behaviour, our findings do suggest that reducing TV viewing could go some way towards reducing rates of anti-social behaviour in society.’ The study also found that watching too much television in childhood was associated with aggressive personality traits and an increased tendency to experience negative emotions in adulthood.