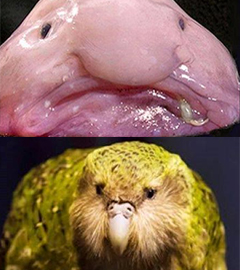 He Ain’t Ugly, He’s Our Parrot

An international public vote has given the beloved and endangered New Zealand parrot, the kakapo, the unwanted title of the world’s second most ugly animal. The ugliest, according to the online campaign by the Ugly Animal Preservation Society, is the grumpy looking, gelatinous blobfish.

The campaign was devised to draw attention to the plight of the more “aesthetically challenged” endangered species because cuter but also threatened animals such as the panda often hogged the headlines.

But the campaign has earned the ire of local fans of the face of New Zealand conservation, Sirocco. Fans have inundated Sirocco’s Facebook with posts of outrage at the ugly slur.

“Blasphemy! Sirocco Kakapo is adorable,” writes Jenifer Bement. Dai Lowe adds: “How can anything that looks like a green teddy bear be considered remotely ugly?”

Contest organiser and biologist Simon Watt said he wanted to draw attention to the threats facing the world’s less photogenic but wonderful creatures.

“If extinction threats are as bad as they seem, then focusing just on very charismatic megafauna is completely missing the point,” he said. “I have nothing against pandas but they have their supporters. These species need help.”