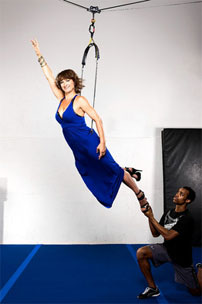 One of the most sought-after stuntwomen in Hollywood, New Zealander Zoe Bell crashes through glass, slams into book cases and leaps from tall buildings. She has done stunts on more than 2 films and television series, including Alias, Kill Bill and Xena: Warrior Princess. Asked if she could accomplish a 22-story spinning fall from a skyscraper for 24’s Catwoman, Bell thought for a moment and said, “Yes, I can.” To get the chilling fall just right, she did it four times. “It’s not until after you’ve been hit by a car and landed all right that the fear kicks in,” she said. Beyond basic instructions — face-first through the window, for instance — much of the job requires ad-libbing. In Kill Bill, she watched Uma Thurman perform in a fight scene before stepping in to be tossed against a glass bookshelf. Watching Kill Bill, Bell often can’t tell who is on the screen, herself or Thurman. “I asked Quentin [Tarantino] and he’s not sure either,” said Bell. Bell has acting roles in two movies that are due out next year, Hansel & Gretel: Witchhunters and The Baytown Disco. Bell grew up on Waiheke Island. She currently lives in Los Angeles.