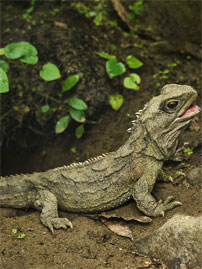 Feral Cats Out Tuatara In

Sixty tuatara have been released on Motuihe Island, which lies between Motutapu and Waiheke islands in the Hauraki Gulf. The New Zealand Department of Conservation (DOC) and the Motuihe Trust spent many years ridding the island of non-native predators and other pests, making it a safe haven for many threatened species unique to New Zealand. DOC Auckland area manager Brett Butland said the island was made completely pest-free by removing feral cats and rabbits in 2005. “Removing the pests enabled the Trust to establish a nursery on the island that produces up to 55,000 native plants a year,” Butland said. The Department and the Trust hope these 60 tuatara will eventually grow to a population of 18,000.