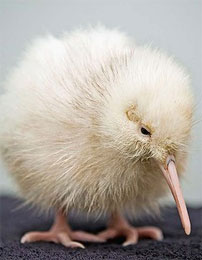 A rare white kiwi chick has been born — the first to be hatched in captivity — at the Pukaha Mount Bruce National Wildlife Centre, 24km north of Masterton. The chick, named Manukura, is not an albino but the rare offspring of some North Island brown kiwi from Little Barrier Island. Elders from the Rangitane o Wairarapa iwi gave the chick his name, which means “of chiefly status”. Rangitane chief executive Jason Kerehi said tribal elders saw the white chick as a “tohu” or “sign” of new beginnings. “Every now and then something extraordinary comes along to remind you of how special life is,” Kerehi said. Manukura will remain in the nursery until the end of May. Visitors can view him in his nocturnal brooder box and at his daily weigh-in at 2pm.