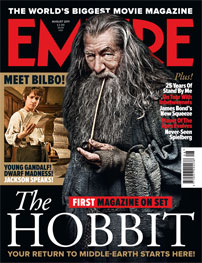 “In honour of [Peter] Jackson’s long-awaited return to Middle-earth for two dragon-and-dwarf-laden prequels — as a “good luck charm” according to the director — Empire takes its symbolic and rightful place as the first magazine in the world to put The Hobbit on its cover. Peter Jackson’s much-anticipated film The Hobbit: An Unexpected Journey, based on J.R.R. Tolkien’s novel and serving as the prequel to The Lord of the Rings film trilogy is currently shooting the two part series in New Zealand. Jackson assures Empire he is once again reaching for the mighty spectacle of Lord of the Rings, but also bringing a certain ‘Hobbity-ness’ all its own. “The tone is actually the part of it I’m enjoying the most,” he laughs, casting a fond eye upon his rabble of exotic dwarves, clattering about set like they own the place. “They have a healthy disregard for the icons of Middle-earth.” The Hobbit cover story features in the August issue of Empire.

Tags: Empire Magazine  Hobbit (The)  Lord of the Rings (The)  Peter Jackson