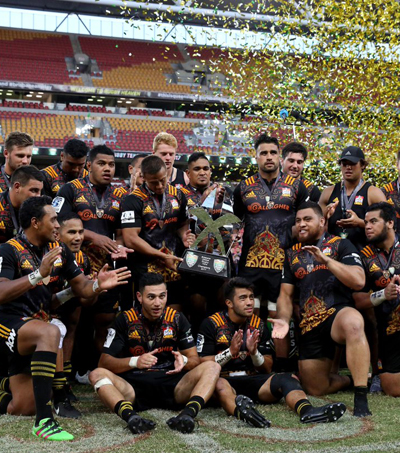 “The Chiefs have overcome the emotional loss of former star Sione Lauaki and an injury-ravaged final to take out the inaugural Brisbane Tens with a 12-5 victory over the Crusaders at Suncorp Stadium,” writes Phil Lutton in an article for The Sydney Morning Herald.

A large number of the Chiefs players and staff were close friends with Lauaki, who died overnight at just 35 and “who was capped 17 times for the All Blacks and a fixture at the Chiefs for seven seasons. They stood arm-in-arm before the game, then again afterwards as the Crusaders joined the circle in tribute,” as reported in the article.

“A shocking start to the day, a hell of a lot of emotion. Especially Liam and other guys that were really close to him. It’s a difficult time,” said Chiefs coach Dave Rennie.

“We talked through things early, we offered Hunga (Liam Messam) the chance to go home. He decided he wanted to stay and play for Wax (Lauaki) and I thought he was sensational. The way the boys played today, the way they honoured Sione, was pretty special.”

“I was trying to get the first plane back with Jerome Kaino. We know what Wax would have wanted and he’d probably tell me to stop crying. The boys really wanted to do it for him,” said Messam.

“It was pretty tough. But I was happy to get the win. It’s been a big weekend, a lot of running, Tens is a lot harder than Sevens. We’ve got a young group of men that came out and showed what we are about.”

Lauaki played 70 games for the Chiefs from 2004-2010 and was considered as one of the favourite sons of the province. The loose forward had been diagnosed with kidney and heart problems in 2012 while playing in France. He was especially close with veterans Messam and Hika Elliott, who will return to New Zealand on Monday to pay their condolences to the family.